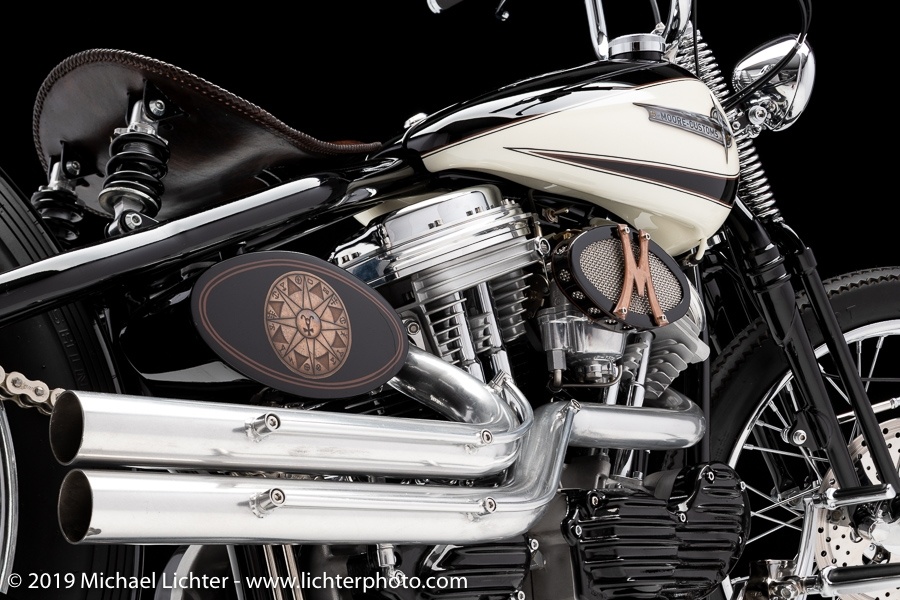 So how did the fun lovin' truck drivin' Brit Karen Moore end up building this beautiful bike in Wichita, KS? Well, I can tell you, she didn’t take a non-stop jet to get there! While she lived most of her life in England, she also lived in Turkey for several years, then she made her way to Ohio. She started driving an 18-wheeler coast-to-coast until she was transferred to Wichita. Learning to ride her Heritage Softail was next on the agenda, and then, after a few years came Larry Moore. While delivering to the place he worked as a heavy equipment operator in 2015, they connected over bikes, and they’ve been a couple ever since.

With Moore Customs now part of her life, Karen became so at home around customs that she wanted to build her own. That’s where Godspeed, as she named this bike, comes in. As it turned out, she and Larry built this rigid Sporty hot rod project together. With a master to learn from, Karen was able to do a lot of the fab work herself, including cutting out and shaping her own fuel and oil tanks. And for those of you that may not be familiar with Larry, he has built some of the most amazing customs these last few years. (Winning a trip to Germany to represent the USA in AMD along the way!) You can see the attention to detail Moore Customs is so known for in many parts of this bike.

Larry also puts on The Chill Motorcycle Show in Wichita with its pro-invitational category. While it was postponed due to the COVID shutdown, it is now scheduled October 23-25, so get there if you can. In the meantime, watch for a full feature on this bike in Cycle Source Magazine.

Summers Here - Time to Cool Down

Bean’re is on his way home